A few of the successes we've accomplished for clients:

A single event can make a big difference. After one client saw an event related to their issue, we developed it into shareable graphics and social media posts pushing people to sign our petition. With no advertising, we organically attracted over 100,000 signers, doubling the organization's email list. Those new subscribers then become donors and volunteers, making for a huge return for the client.

In just a couple weeks, we transformed the organization's footprint by capitalizing on the news. Want that kind of success? Then get in touch!

We helped an independent documentary movie project achieve its goal of raising $60,000 on Kickstarter by engaging supporters, reaching targeted influencers, and moving supporters to contribute. We identified key supporters, wrote messages to engage them and persuade them to both donate to the Kickstarter campaign and then also to share it on social media.

The Kickstarter campaign surpassed its goal and the movie got a theatrical release. Looking to quickly raise money for your project? Reach out to us now.

Increasing donations by more than 150%.

You might not want to do a full redesign of your website but small, strategic modifications can make a big difference. It might seem unbelievable but we helped Cathy Guerriero's campaign for Public Advocate achieve a 158% increase in donations.

By just testing different variations of the wording on the donation page, her campaign brought in thousands more in donations by emphasizing matching funds on the page. That wasn't just a temporary boost, either. Each and every fundraising email suddenly became significantly more effective, too, at a crucial point in the election.

In another test, we also tripled volunteer signups by including a photo of volunteers on the volunteer signup form. It was just a small change but made a big difference for the campaign and it's those kind of big, strategic wins that we can help you achieve.

Building an audience of Democratic voters online to win a primary.

The Anybody But Quinn independent expenditure in the 2013 New York City Democratic Mayoral primary had a small core of activists eager to make sure that the front-running City Council Speaker Christine Quinn was not elected mayor but couldn't rely on them to move the electorate. We built an audience of close to 8,000 Facebook fans who shared negative stories and advertisements with their friends, reaching hundreds of thousands of Democratic voters who saw why Quinn was wrong for middle-class New Yorkers. Even though Quinn had lead for the vast majority of the campaign and before we started, had close to 40% in the polls, on Primary Day, she won only 15% of the vote. In recognition of our success, the campaign was named a finalist for the New Organizing Institute's Most Valuable Campaign. Are you trying to persuade voters? We know how to do it.

Michael managed now-City Council Speaker, then-Council Member Melissa Mark-Viverito's website and Facebook page, increasing her reach on Facebook by more than 1,000% over the course of my tenure. We disseminated important news about what she was working on and local events and opportunities. We also used Facebook to turn out constituents to participate in participatory budgeting, ending up with 1,000 voters for a first-ever process. Want to reach your constituents? We can help you do that. 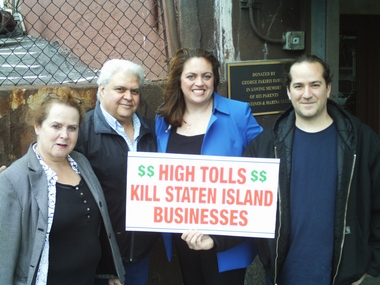 Cathy Guerriero needed to reach the members of the Staten Island Democratic Committee prior to their endorsement vote. We used Facebook advertising to inexpensively reach those members with our message that Cathy Guerriero was paying attention to Staten Island issues and would fight for them as Public Advocate. Without a significant expenditure of resources, we were able to keep the party neutral during a contentious primary. Need to win over key decision-makers? Let us know.

Raising hundreds of thousands of dollars for a Congressional candidate in a hotly contested open seat election.

With BuzzMaker in 2012, Michael helped Congressman Alan Grayson (D-FL) raise several hundred thousand dollars from fundraising emails as he ran for an open seat created by redistricting. Our robust email program leveraged his profile as a progressive leader to raise more money from email alone than than many Congressional campaigns raised in total, from tens of thousands of small-dollar donors. Raising money for your cause? Make sure you don't miss an opportunity.

Recruiting thousands of activists eager to get involved.

While with BuzzMaker, Michael did a petition campaign for Florida Watch Action highlighting the long delays many voters faced as they cast their ballot in the 2012 elections. By picking up on a hot-button issue while it was in the news, Florida Watch Action recruited tens of thousands of activists who were eager to get involved in their work to expand early voting. Looking to build your base of supporters? We can help you sign them up.